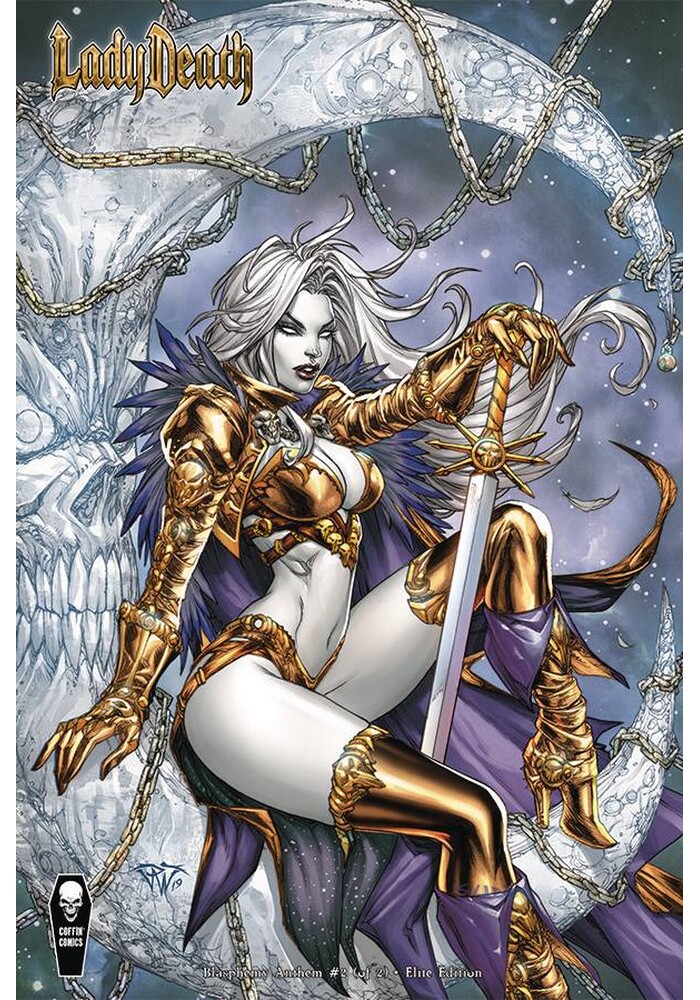 In the wake of the tragic events revealed in Lady Death: Scorched Earth,the extinction-level villainy of The Trinity threatens humanity,the Halo Corporation threatens Lady Death and the Hellbourne Sect appear to be the puppet masters behind it all. To defeat these threats for once and for all,THE SWORN,a group of supernatural anti-heroes are assembled. The Sworn! Led by the shape-changing werewoman Steelheart; Michael,the warrior Arch Angel; Wargoth of the Everkind; Zack & Zane Zander,supernatural exterminators extraordinaire; the mysterious supreme sorcerer Mr. Atticus Marrow; witch-in-training Chaotica; dimension jumper Hellslinger; and introducing Lady Satanus,the devil's daughter! What is Lady Death's role in all this? Is she an ally,or an enemy of The Sworn? It all comes down to this,and we promise…in the end,Lady Death is irrevocably changed forever!!!! For every 10 copies of 'Blasphemy Anthem #2' ordered and received in any combination,retailers will qualify to order a Paolo Pantalena 'Elite' edition at $4.99 less standard discount.
Be the first to write a review!
Path: Home > COMIC BOOKS > COFFIN COMICS COMIC BOOKS SERIES > LADY DEATH BLASPHEMY ANTHEM #2 (OF 2) 10 COPY PANTALENA ELIT